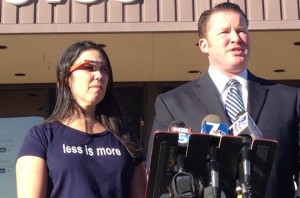 Cecelia Abadie, left, with her attorney, William Concidine, talks to media after charges against the motorist for wearing Google Glass while driving were dismissed in San Diego County traffic court on January 16, 2014.

A San Diego traffic court judge on Thursday dismissed a citation received by Temecula woman in October for wearing Google Glass while driving in what’s believed to be the first case of its kind.

Commissioner John Blair found that Cecilia Abadie, though wearing the high-tech glasses, was not actively using them when she was pulled over by a California Highway Patrol officer, accused of speeding on Interstate 15 on Oct. 29.

The judge also dismissed the speeding ticket because of a lack of evidence.

Google Glass is the Silicon Valley Internet giant’s experiment with wearable computing. The $1,500 eyeglasses are being tested by about 10,000 people nationwide. They’re expected to become available to the general public sometime this year.

Google Glass links to the Internet wirelessly via Bluetooth. Using a small screen above the right eye, the glasses respond to voice commands and can perform tasks such as checking email or airline flight times.

– Based on $40,000 Gross Sales
– Unlimited Additional Insureds
– No Limit to Number of Inflatables
– Print Certificates Online!

“Thank you for your quick response. I love your website. It is so easy and fast getting a qoute. Good, prompt service.”

“LiveAgent® is often available after normal business hours for questions and answers regarding insurance or bond premium rate price quotes.”